Back to Balance is the first solo album of one of Holland’s best drummers: Koen Herfst. With his diverse musical background he has managed to create his own sound for this album that exists of 14 songs. Koen has been active in the music business for years and has found many musical friends who were able to assist him on this record. If you can bring together no less than 25 musicians, you know your heart his been in the right place all along!

Here I Am is the opening track and features Daniel de Jongh on vocals and none other than Judith van der Klip on violin. It is a smashing track, the drummer does come from the metal scene after all (he used to drum for Epica, Bagga Bowns en I Chaos, among others) and this is clear in the track. The great work continues, but the drums are a bit more to the background in ‘Erase or Rewind’. The track has fast and well-timed hits, with a double bass and great vocals by Mats Leven. The song flies by, so a rewind is neccesary. The focus is on the musical in ‘The Kramer’, an instrumental track with guitar riffs from Marcel Singor and a sturdy bass by Joost van der Graaf. The song is very versatile and with a great drumsolo the party is complete. You can clearly hear that Herfst has poured everything he knows and can do in this record.

‘I Don’t Need To Tell You’ is one of the best songs on the record, but what else would you expect from a duet between Mats Leven en Marcela Bovio. Marvin Vriesde plays the guitar, Johan van Stratum plays a rocking bass and there is a very strong violin part by Judith. The whole thing sounds like an oiled machine and could easily be on a Lucassen (Ayreon) record. The track sounds powerful and has a certain dominance. The metal and rock keeps streaming in Koen’s blood, but with frontman Tai Stamph ‘Total Hate’ all sounds a bit more hiphop. The rapper from Splendid knows how to lend his swing to a song. Claudia Soumeru (choir), Remko van der Spek (guitar) and Michiel Eillbarch (bass and shouts) are also featured on the track and make it complete. This is a song that sounds different from the rest and brings diversity back.

Koen Herfst shows in the titletrack why he is one of the best drummers. The power with which he builds the track and the balance he creates makes the song live up to the name. It has become a show piece with various talent he displays. ‘Begone’ is a track that I was looking forward to, because it has Valerio Recenti on vocals. The singer of My Propane has a raw and rough voice that fits perfectly with the drums. Add Epica’s Coen Janssen on keys and orchestra, Eef van Riet on guitar an Michiel on bass again and you have a standout track that can definitely have a sequel! The love of music is tangible.

‘1916’ is another instrumental track that sounds rough and works itself up to a big massive whole. This time Robin Zielhorst plays bass, Wim den Herder the guitar and the beautiful Judith van der Klip on electric violin. A nice change to where the musicians complement each other to make a magical sound. Koen knows how to drum it together!

We haven’t praised this man enough, because there are still songs left! His energy never seems to run out. ‘Social Junkie’ is an experiment with Claudia Soumeru and Rodney Blaze on vocals. It is the most disorderly track on the record, which gives it a new and creative vibe. The track needs to grow, so put it on repeat.

Especially when you hear the clean ‘Ghetto Cornetto’. Nice hits, supported by Leif de Leeuw on guitar and Joost van der Graaf on bass. The instrumental pieces in between please me, but I like the total band pieces better. Thankfully Ward Palmen appears as vocalist on ‘Now is the Time’, together with talent Eller van Buuren on guitar. Koen Herfst also sings along, it’s the icing on the cake. The raw rock track is pure joy and you would expect it of bands like Faith no More or Pearl Jam. In ‘Siamese Support’ the drummer is accompanied by Mendel Bij de Leij on guitar and Joost on bass. The song sounds heavy and is played with a lot of force. The track is not very strong per se, but it comes across very intense. Thankfully there is a lot of wisdom in everything you hear and it makes you experience a meltingpot that is perfectly executed.

If you thought we were done with all the diversity you were wrong. There are still two tracks left and ‘Never Been so Wrong’ is a cracker right away. Eva Kathryn takes care of the vocals and Koen takes care of everything else. The track is so crazy you wouldn’t even expect it on the most brutal metal records. The song is not suitable for everyone and should come with an age limit or a label: ‘only for the lovers’. The last track ‘Attitude of an Astronaut’ features the best of everything. The dominance of Daan Janzing on guitar, the flying bassman Johan van Stratum and legend Joost van den Broek on the synthesizer. Backingvocals are done by Annemiek Starrenburg and the one and only Valerio Recenti lends his voice to the rest of the track. This is a great way to end the album; can they make a video of this please?

This could easily be called a super band, a super album or a super collaboration! The album is a debut that deserves the highest praise. Koen Herfst delivers a foot print in the drum world with this record. He didn’t need to prove anything, but he did anyway! The album which features 25 guest musicians is a crown on his 18-year work as a drummer with many faces. The love of music, the passion for the drums and the being together with friends on one record with 14 tracks.

‘Putting Koen in a box………an arena would be too small!

The record will be in stores later this year, but you can buy it already at Bandcamp.

If you only want a digital copy you will have to wait a bit longer.

Review: Koen Herfst - Back to Balance 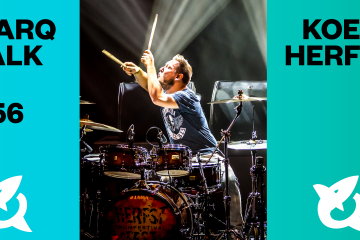 Review: Koen Herfst – Back to Balance

SharQ Talk: Will Fairhead & The Gulls